John Scalise  has been working on the dog park project since its inception in 2011.  John and his wife,  Lynn Simons, became involved in the project as a legacy for their daughter, Hannah, who died of cancer in January of 2011.  Prior to her death, Hannah asked that money not be spent on her funeral, but that the proceeds from her life insurance and savings bonds are used  to create a place in Mount Pleasant where people could run with their dogs.  When John and Lynn learned that a group was forming to plan and build a dog park they enthusiastically gave their support to make this a reality.

John and Lynn’s dogs include Charlie, a red golden retriever mix, Molly a Springer Spaniel, Hannah's dog, Sophie, a Jack Russell/Airedale terrier mix, and Bruce, a Doberman mix who seems to outwit them in most things.

John retired as an Outpatient Therapist at Community Mental Health for Central Michigan after 30 years of service and is now a full time parent to their four dogs.
Eric Gaw, DVM
Vice President & Treasurer

Dr. Gaw has been a veterinarian in the local area for seventeen years.  He is originally from Monroe, Michigan and graduated from Michigan State University in 1997.  He has worked at Mt. Pleasant Animal Hospital, and is currently practicing at Pol Veterinary Services where he specializes in canine and feline medicine.

Dr. Gaw and his wife Diane (Kovacs) Gaw have been active in various aspects of purebred dog sports including conformation, obedience, and agility competition for many years, breeding and training champion Poodles focusing on health and temperament.  Dr. Gaw became involved with Friends of the Dog Park in the very beginning of the process, with the goal of helping to ensure the health and well-being of its canine participants.

Brian Baker
Secretary
​
Brian is Secretary of the Dog Park, and has lived in Mount Pleasant since 1974 when he enrolled in the Broadcast and Cinematic Arts program at CMU. In 1983, he married Ruth Vaughn and began a career as a broadcast engineer, producer-director and traffic coordinator at WCMU Public Television. Recently retired, Brian and Ruth have enjoyed the devotion of three dogs over the years, including a Springer Spaniel named Maya, a Shepherd mix named Cleo, and they now enjoy the company of their Rat Terrier mix, Buckshot. Brian has worked with various civic groups over the years, including the Mount Pleasant Area Diversity Group and PFLAG.
Lynn Simons

Lynn Simons, former Secretary of the Friends of the Dog Park, is a mother of four children.  Her child Hannah, died in 2011 at the age of 19, and Hannah wished for a place in Mt. Pleasant where dogs and people could play, such as a dog park.  Lynn and her husband, John Scalise, became active with the dog park idea to follow through with Hannah's wishes and honor her memory.  For Lynn and John, it is a work of love.

In her lifetime, Lynn has rescued greater than twenty dogs from shelters, and raised them for the remainder of their lives. Current dogs include:  Molly a Springer Spaniel;  Charlie, a ginger Golden Retriever, rescued from the Mt. Pleasant shelter;  Sophie, Hannah’s dog, who is a large, 50 pound plus, terrier mix, rescued from the local shelter;   and Bruce, a Doberman mix, rescued from a shelter in Pittsburgh.  Lynn enjoys rescuing dogs, helping them cope with all their prior life baggage, and enjoy a safe and loving home.

John Dinse is past president of the Friends of the Dog Park. Like many initial supporters, he got involved in 2011 with the group of citizens who heard of a possible opportunity to develop a dog park for the Mt. Pleasant community. At the time, John was a Trustee on the Charter Township of Union Board. He played a primary role in gaining the support of the Union Township for partnering with the City of Mt. Pleasant and FDP to jointly develop and fund a dog park. Along with other FDP Board members, he has continued to play an active role, both as a Union Township representative on the Dog Park Advisory Board, and as coordinator of FDP’s participation in the MDOT Adopt-A-Highway program. John and wife Laura recently adopted a rescue from H.A.T.S, a 2 year-old Maltese mix, whom they named Lupe. Lupe is a very energetic and loving dog who loves her off leash time in the Dog Park as well as walks in several area wooded parks.
Sue Gamble

Sue Gamble has had dogs all her life.  She has been a member of the Golden Retriever Club of America and the Mt. Pleasant Michigan Kennel Club since 1990.  As a member of the kennel club, she has served as secretary and is currently serving as vice president and director of the training committee.  She also teaches puppy and beginning obedience classes for the club.  She has also participated in pet therapy with her Golden Retrievers, visiting nursing homes throughout the mid-Michigan area.

For the past two years, she has served as chair of the Mt. Pleasant Michigan Kennel Club Dog Shows that are held in June.  She assists with the Canine Good Citizen test when it is given, and both of her current and former dogs have earned AKC obedience titles.  She is currently a member of the Mid Michigan Golden Retriever Club and has served as a ring steward in obedience trials at their specialty shows.  Sue currently has two Golden Retrievers and is a contributor to the Humane Animal Treatment Society.

Outside of her work with dogs, she is an Associate Professor of Music at Central Michigan University (CMU) and has been on the faculty since 1978.  From 1983-1990, she served as chair of the Department of Music.  She recently retired.
​
Amy Barr-Tickle
Amy Barr-Tickle is the co-owner of Four Paws Rehabilitation, LLC, a facility that provides physical therapy services to dogs and cats in the Central Michigan area. She has been a human physical therapist in the area for 20 years. Four Paws Rehab also provides obedience training and therapy dog prep classes. Amy and her wife, Emily, enjoy taking their dogs to Hannah's Bark Park to interact with the other dogs and people. They have two dogs and three cats. Linus is a Deaf Dalmatian but he doesn't let his disability get in the way of participating in AKC and CPE agility events. He also is a Canine Good Citizen and a Tale Wagger through the Mt Pleasant Kennel Club. He knows over 30 hand signals. Marcie is a happy German Shepherd Labrador mix. She is full of energy at all times so the Bark Park is a good place for her to burn off some energy. She is also a Canine Good Citizen and has done some scent work training to find the indoor cat who likes to escape outdoors. The two cats are mother and son ginger short-haired tiger cats. Kirin is a sweet kitty with a perpetual angry face and Puck is just naughty at all times. The third cat, Pumpkin, is another ginger short-haired cat who is a retired barn cat as he has chronic vertigo. 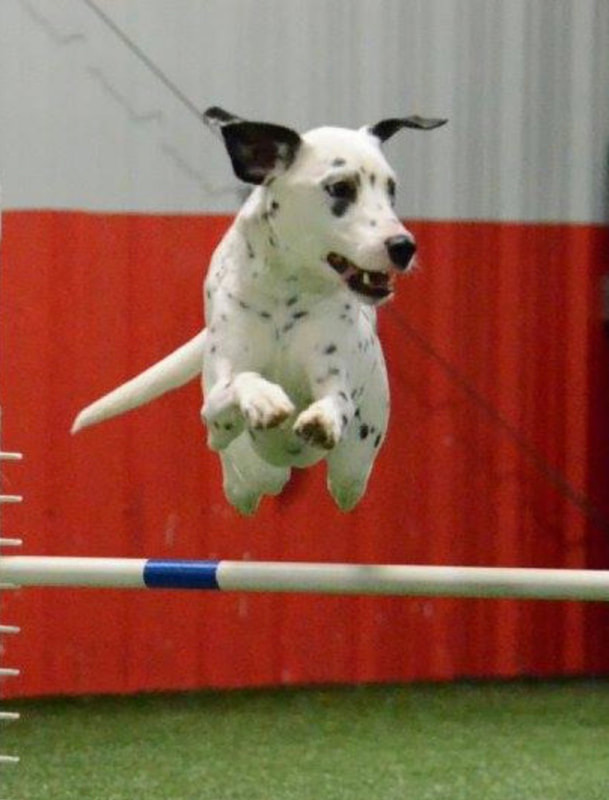 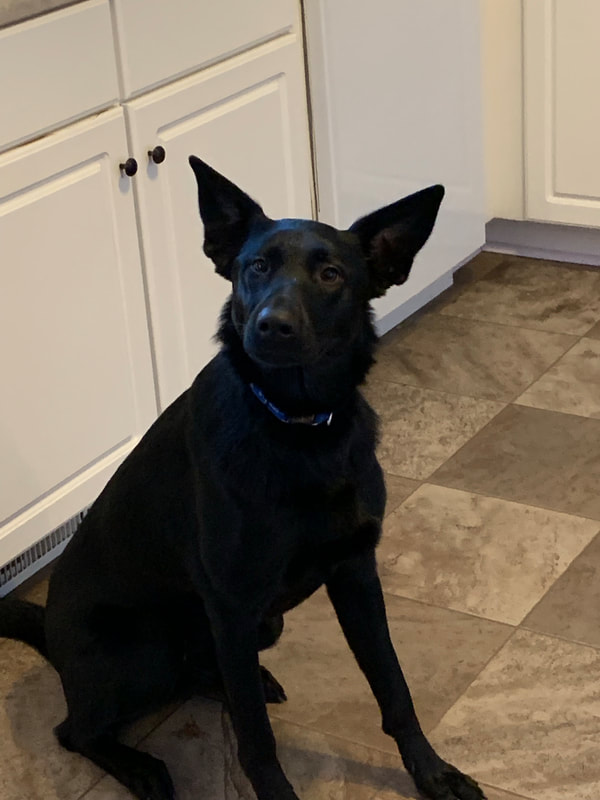 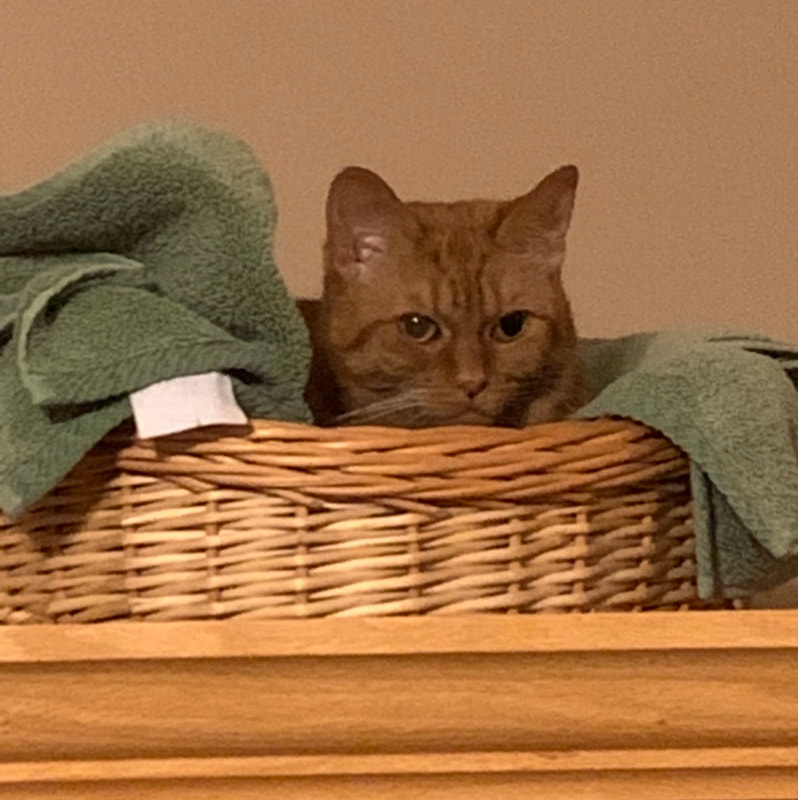 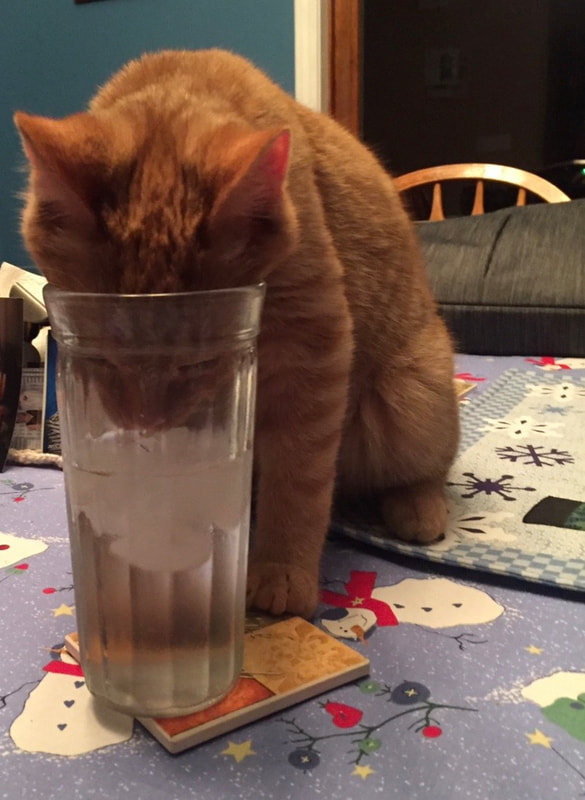 Natalie Shattuck
​Born and raised in Mount Pleasant, Natalie continued her education at Central Michigan University and earned a Bachelor of Applied Arts in Integrative Public Relations in 2011. Natalie frequents the dog park with her dog Hendrix, a long-legged Treeing Walker Coonhound mix. Natalie has served as volunteer and foster for the Humane Animal Treatment Society. She fostered Hendrix’s pregnant mom – the litter was born and raised to 10 weeks old in Natalie’s house.
Natalie has been employed as managing editor for the Saginaw Chippewa Indian Tribe of Michigan since 2013. In her spare time, she performs as a vocalist and serves as public relations manager at the family-owned venue, The Gem Theater in St. Louis, Mich. Natalie is passionate about the dog park and can be spotted there several times a week. 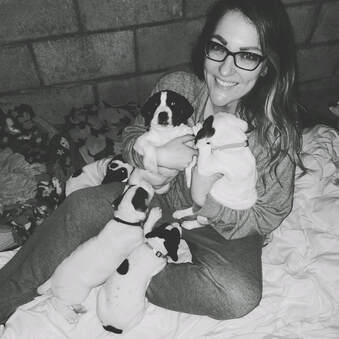